Both awards were hotly contested.

The winners will secure complimentary space to exhibit at APPEA 2023.

The criteria for the awards includes: originality in stand design, innovative use of space, and the creative ways the exhibitor communicates their offering/tells their story.

EMESENT – For a stand featuring a robotic dog and drones used in site monitoring and aerial mapping.

A feature of the stand was a robotic dog

APPEA Acting Chief Executive Damian Dwyer said: “The judges were particularly impressed with the engagement of the team with delegates and the youth program, the use of technology and the creative ways they engaged around the exhibition.” 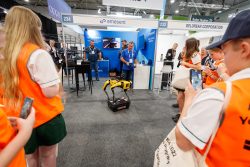 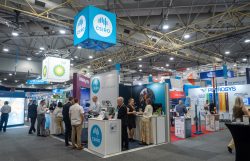 The CSIRO stand was honoured in the Best Custom-Built Booth category.

Mr Dwyer said: “As I am sure those involved with attest, the combination of COVID and some staff shortages to build stands has meant that delivering a custom build stand this year was no mean feat.

Virtual reality was featured at the CSIRO booth.

“The judges wanted to give honorable mentions to ‘Senex Energy’ for demonstrating the important role natural gas plays in our everyday lives, and ‘Rock Flow Dynamics’ for engaging with delegates through the spirit of competition.

“The winning custom-built booth was from ‘CSIRO’. The judges were particularly impressed with the way the team drew people in and engaged with them through various snap shots of technology and use of virtual reality to demonstrate how the partnerships within our industry will play a big part in energy security and decarbonisation for the region.” 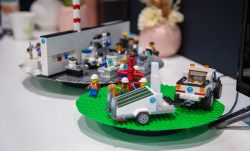 The 2022 APPEA Exhibition was sponsored by INPEX.

APPEA’s technical and business program provides an opportunity for the exchange of ideas and best practice in all aspects of our technical and commercial operations.

This is a tangible example of how our industry is committed to information sharing and collaboration.

The technical and business program was again developed under the guidance of APPEA Honorary Life Member, and Technical Papers Chairman, Dr. Steve Mackie, with support from the Conference Technical Program Committee.

On behalf of the APPEA Board and all delegates, thank you to Steve and the Committee for devoting the time and expertise in assembling such an impressive and without question, world class program that is in turn published in The APPEA Journal each year.

These awards recognise the authors and presenters who have achieved excellence in their written papers and the presentation of their endeavors.

Best Extended Abstract published in Supplement 1 to The APPEA Journal

“The paper showed there is great promise to use the technique to work on identifying, and then reducing, lost time incidents.”

“Seismic, petrophysical and petrological constraints on the alteration of igneous rocks in the Northern Carnarvon Basin, Western Australia: Implications for petroleum exploration and drilling operations”.

Written by PhD Candidate Mike Curtis from the University of Adelaide. His PhD supervisor Simon Holford accepted the award on his behalf.

“The Future Energy Leader: A Millennial Dilemma” by “Polly Mahapatra” from Chevron Australia. 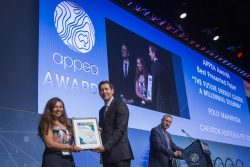 Polly Mahapatra from Chevron was honoured with Best Presentation

APPEA Acting Chief Executive Damian Dwyer: “We all know that a paper can be well-written, but it is also important at an event like this that it is well delivered. Polly delivered an engaging presentation about the work underway to re-engage newer generations with our industry.” 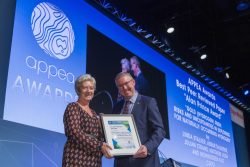 The award was accepted by Linda Stalker.

APPEA Acting Chief Executive Damian Dwyer: “This is a highly prestigious and eagerly sought award. It is named after Alan Prince, the inaugural editor of The APPEA Journal and a Reg Sprigg Gold Medalist.

“With the growing interest in hydrogen and its relationship to a decarbonised energy future, this paper addresses ‘gold’ or ‘white’ hydrogen, geological forms of naturally occurring hydrogen. Specifically, the paper considers the risks and uncertainties involved in its exploration and provides a roadmap for reducing them.

The 2022 APPEA Technical and Business Program was sponsored by BP