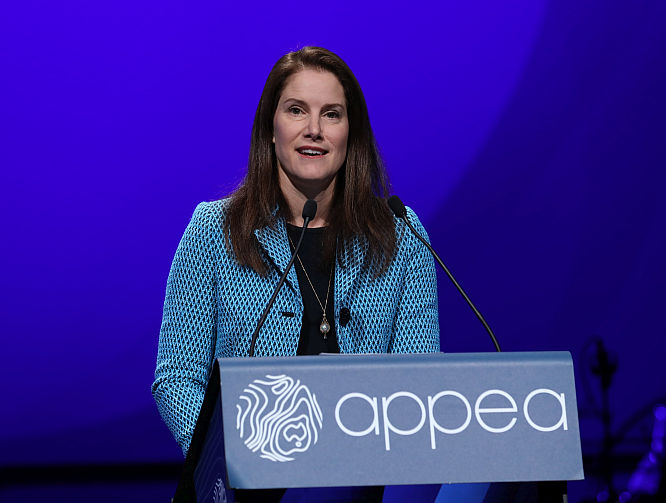 Challenges are nothing new to the women and men in the oil and gas industry in Australia.

Our industry began in the remote plains of central Queensland, under the beating sun of central Australia and in the treacherous seas of Bass Strait.

From the longest of supply chains to the roughest oceans the story of our industry is one that closely mirrors the formation of our nation.  It is a story of battling the adversity that comes from big distances, extreme weather and really tough situations.

We have the ability to overcome challenges and our industry is overwhelmingly welcomed in places where it operates.

From the Darling Downs to Gippsland, jobs on our projects are sought after. From Moomba to the Pilbara our community partnerships transform the ability of under-resourced local organisations to make a difference in people’s lives.

And in every single community where we operate our economic contribution is accepted as the lifeblood of the regional economy.

The further we go from our areas of operation, the more challenges we face to our aspirations.

So, a question we must answer is: why is there such a gulf in perception from the regional areas where we operate to the commentators and activists of the inner city who rely on our products?

While I firmly believe we will only understand this by listening to people, I will offer two observations.

The first is that all too often we have been unwilling to be part of the conversation on the issues that really matter to Australians.

And the second is that, when we have engaged, we have chosen comfortable rather than challenging conversations.

Much has been said – on this stage as well as at other forums – about the need for business to engage more willingly in conversations, and the dearth of corporate leadership.

This is an issue that will challenge many of us for different reasons.

Some industry leaders will quite reasonably say that theirs is not a political office, so why should they engage in a conversation about issues like tax or immigration?  But this is a response from a bygone era, a response that ignores that, in the age of Twitter, we are all expected to take a position.

In preparing for today I was reminded that graduates applying for positions in our businesses this year probably grew up arguing with their parents about when they were old enough to have their own Instagram account.

For the latest generation of voters, broadcasting opinions and insights far and wide is just a normal part of daily life.

But, rather than actively participate in open conversations about issues that should concern us, many of us have chosen to retreat into our own corporate comfort zones – a world of spread sheets and project updates.

Let’s be clear.  No one else will make our case for us.

And there are no places in Australia that we can take for granted.  This point is obvious here in South Australia – a state with a long, successful history hosting our industry but also the latest to believe it necessary to impose a moratorium on some onshore unconventional gas activities.

It is a reminder that we can’t be asleep – even in a small area of a big state.

This is not the consequence of the actions of any one individual or business – but through a general inability of our industry to demonstrate to an increasingly vocal and sceptical electorate the shared value we create.

It has been our collective silence that has allowed views that would have been considered radical only a decade ago to grow into general acceptance – and our unwillingness to correct them has allowed them to be passed off as truths.

We have been simplistically positioned as not paying our fair share of tax.  We have been inaccurately described as trampling on the rights of land holders.  And deliberately misleading statements have painted us as not making a real contribution to the communities where we operate.

There are many issues where our industry must seek to improve its perceptions in the community.  They are the issues that dominate the headlines in traditional media and traffic on social channels.

We have taken the debate to Canberra and to the business pages of our broadsheets – but this is no longer enough.

We must extend the conversation to the lounge rooms, train stations and coffee queues across the country where 60 square centimetres of screen has become the battleground that really matters.

We must find a way to address genuinely held concerns about energy reliability, affordability and how we will meet international commitments of greenhouse gas reduction.

There is a role for all of us in this vital task.

As the chair of APPEA, and on behalf of my colleagues on the Association’s board, I can make the commitment that beyond our ongoing engagement with politicians and mainstream media we will broaden that conversation.

APPEA will seek every relevant opportunity to make the case for growing the industry’s contribution to our country.

The stark reality is that we can only continue to do that – to make a contribution to our country – by ensuring we remain globally competitive in order to attract international investment.

After the incredible growth experienced in the early years of this century, analysts and commentators came to judge investor confidence in the upstream sector on securing backing for new LNG trains and greenfield developments.

It was a narrative that judged investor confidence solely in brand-new projects costing tens of billions of dollars.

But why does the outside world look only at greenfield development as an indicator of our industry’s health?

We, as an industry, have not properly articulated the enormous amounts of capital required to maintain current production levels.

This is, after all, the way we will continue to provide valuable jobs in regional Australia, deliver the broader prosperity for workers’ communities and deliver enhanced tax revenues for the nation.

There has been little discussion or understanding on the scale of the enormous task ahead – simply keeping existing domestic markets whole and feeding the appetite of 21 LNG trains.

Herein lies a significant internal challenge we will all face in coming years.

This is not a challenge we can fling at the feet of government while washing our own hands of responsibility.

There are no guarantees that investors will continue to provide the capital we need to keep existing trains full of gas.

How will we convince the capital markets in New York, Tokyo and London to continue to invest in developments located in places which are so remote?

I, for one, was encouraged to see investments like Kipper Tuna Turrum in Bass Strait, Charlie in the Darling Downs and most recently the announcement last month from the Gorgon joint venture.

But against this backdrop we have seen too many write downs across the Australian petroleum industry – in both the upstream and downstream sectors.

These write downs are evidence of an erosion of shareholder value.

And the reason we have seen so many writes downs is that too often we have invested shareholder money with an expectation that investments would operate at the top of the cycle.

It is a lesson that is hard learned by all of us – but has had a far greater impact on the communities in which we operate.

It impacts our shareholders through the profitability of our ventures, it impacts Australian workers through lost jobs – and ultimately impacts the Australian people because, put simply, less profitable ventures pay less tax.

Further, our failure to collaborate across projects has also eroded share value.

Whether that has manifested itself in duplication of infrastructure, or a preference for the simplicity of greenfield development over backfill – we have had a poor record on collaboration from east to west.

In the past we may have expected common sense to prevail, and for collaborative outcomes to win the day.  But this has not occurred.  Too often, I fear, we forget the whole can be greater than the sum of the parts.

We must see greater cooperation between ventures to reduce waste and duplication and ultimately drive value to Australian customers.

Because unless we can improve the attractiveness of our projects to investors, ullage in LNG trains may fast become an unmanaged reality – not a situation that will be easily recovered.

We must also demonstrate to communities and regulators that it is only by shareholders continuing to invest in companies like ours that we will have the capital needed to transform the global energy system and meet carbon ambitions.

The energy system is rapidly evolving and changing before our very eyes.

We must articulate how we will solve the fundamental challenge of producing more and cleaner energy.

Energy transition is not a marketing exercise – it is a fundamental challenge that has the potential to rock the foundations of our industry.

Given climate change is the reality, then energy transition must be our mission.

APPEA members accept the societal ambition to reduce our carbon footprint and accept that this shift will transform the product mix of successful energy companies.

The combined assets that supply this energy have a global value of about $55 trillion US dollars.

That is equal to the combined total economic output of the world’s four largest economies – that is the United States, European Union, China and Japan.

If we were to replicate the infrastructure employed today in the global energy system – it would be the equivalent of the value of every single product and service produced in the United States, EU, China and Japan over an entire year.

The move to decarbonise the energy system will require us not only to transform or replicate the $55 trillion already invested. We will have to build extra capacity to provide for more than one billion people who are living today without electricity.

On top of that we need to cater for growth from both population increases and growth in demand from increased urbanisation.

The challenge of the energy transition is this: how do we alleviate the energy poverty of one billion people, provide them with access to the basic services we take for granted – like refrigeration for their food and internet access for their education – all in a carbon-constrained environment?

Here, on technical grounds where we should be considered trusted advisers, our detractors have painted us as dinosaurs.

For decades companies in the oil and gas sector have told the world about how clever they are.  We have used terms like ‘deepest’, ‘longest’ and ‘greatest’ to describe our achievements.

Today nobody outside the engineering community marvel at these accomplishments.

But, as a business leader in Australia in 2018, there are two things I do know.

Firstly, the economic scale of the challenge means the players in this game must be profitable.

We are businesses, not charities, and it is only by driving strong financial outcomes that companies like the ones we operate will continue to be viewed as feasible investments by shareholders.

Secondly, energy companies must secure society’s support for what they do, because without that support they will achieve nothing.

And what communities care about is the shared value we bring – jobs for young people, investments in education, the creation of infrastructure and prosperity we share with the community and a fair contribution to the nation’s tax system.

What our customers care about is how we enable modern life – energy to help people drive their kids to school, heat their homes or power their businesses.

It is the willingness to adapt from the top of these businesses that will dictate both the pace and the success of Australia’s energy transition.

This is a slightly condensed transcript of APPEA Chairman Zoe Yujnovich’s speech in the first plenary session of APPEA 2018.