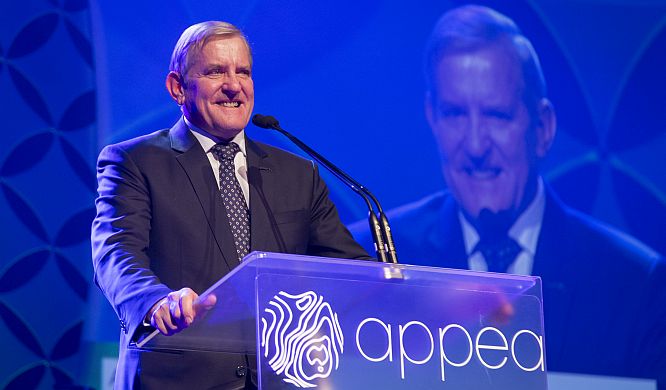 APPEA has honoured three outstanding individuals for their contributions to the Australian oil and gas industry.

Announcing the award at the APPEA 2016 Conference dinner on Tuesday evening, APPEA Board member and Buru Energy Executive Chairman, Eric Streitberg, said Mr Macfarlane has been an energetic and effective advocate for the Australian oil and gas industry.

From November 2001 until September 2015, with one brief interval, he served as the Minister or Shadow Minister for Resources and Energy.

“Ian Macfarlane has earned the respect of both sides of parliament and of the Australian business community,” Mr Streitberg said.

“He is known for his determination and willingness to tackle the difficult issues; his commitment to bipartisan policy; his understanding of business and its role in delivering prosperity; and his ability to combine principles with pragmatism to produce results.

“Ian Macfarlane played a major role in developing the positive policy environment that attracted more than $200 billion to develop a new generation of world-class Australian oil and gas projects. Because of this, Australia will soon become the world’s leading LNG exporter, and the nation will enjoy decades of export income and tax revenue.”

During its 2016 Conference, APPEA also presented a life membership to Chevron Australia’s outgoing managing director Roy Krzywosinski who is returning to the US to take up the position of vice-president of engineering in Chevron’s Houston office.

“Just as importantly, it has helped raise the importance of Australia’s oil and gas industry to the Australian economy.

“Roy has made an outstanding personal contribution to APPEA and the industry in his two years as Chair of the ‘Stand Together for Safety’ Committee.

“He has been a passionate advocate for personal and process safety, and has helped develop a stronger safety culture across the industry.”

APPEA has also invested in the industry’s future by presenting its KA Richards Scholarship to Jon McCullough, a PhD student at the University of Queensland’s School of Mechanical and Mining Engineering. Mr McCullough’s thesis on heat transfer in hydraulic fracturing fluids is the kind of groundbreaking research that will be crucial in providing reliable energy to the world over the next few decades. Download PDF