The sixth in APPEA’s thought leadership series in association with The Australian newspaper, Future Australia casts a light on the big issues facing the country.

The latest leaders’ roundtable held on 13 October delved into the dynamics and politics of the international COP26 climate change conference, set to commence in Glasgow next week from 31 October-12 November.

Dr Pulch started things off with an overview of the European Union’s perspective. He stated his belief that we were at a “crossroads” heading into COP26, citing the latest reports from the Intergovernmental Panel on Climate Change (IPCC) and United Nations Framework Convention on Climate Change (UNFCCC).

He said we need to increase global ambition in two different stages, including medium-term goals to 2030 and in long-term goals to 2050. He stated that while both had momentum, “one was dependent on the other”.

He added that perceptions of action on climate change were important for negotiating trade agreements with the European parliament, and the Glasgow provided an opportunity to make “credible progress”.

Ms Cilento was next up to provide insights into how Australia could “regain its energy advantage and build resilience in the face of climate change”.

Ms Cilento said that Australia should embrace its opportunities to reduce emissions and that her organisation would like to see a commitment from the Australian Government to net zero by 2050 “at the latest”, galvanising existing State Government commitments.

This commitment would help to anchor other developments and increase their prospects of commercialisation, particularly hydrogen, which Ms Cilento said there was a “huge appetite” for in Australia.

Ms Palmerlee spoke next, providing an American perspective on the proceedings. Ms Palmerlee explained that Australia would come under increasing scrutiny from US backers regarding emissions given the increasing emphasis on environmental, social and government (ESG) topics among American companies.

“We think that business plays a vital role in creating the innovative solutions that are going to protect the planet but challenges like [climate change] require collaboration, not confrontation,” Ms Palmerlee said.

“We want to get the best ideas and policies by working together to come up with solutions that are going to improve the environment and grow the economy.” 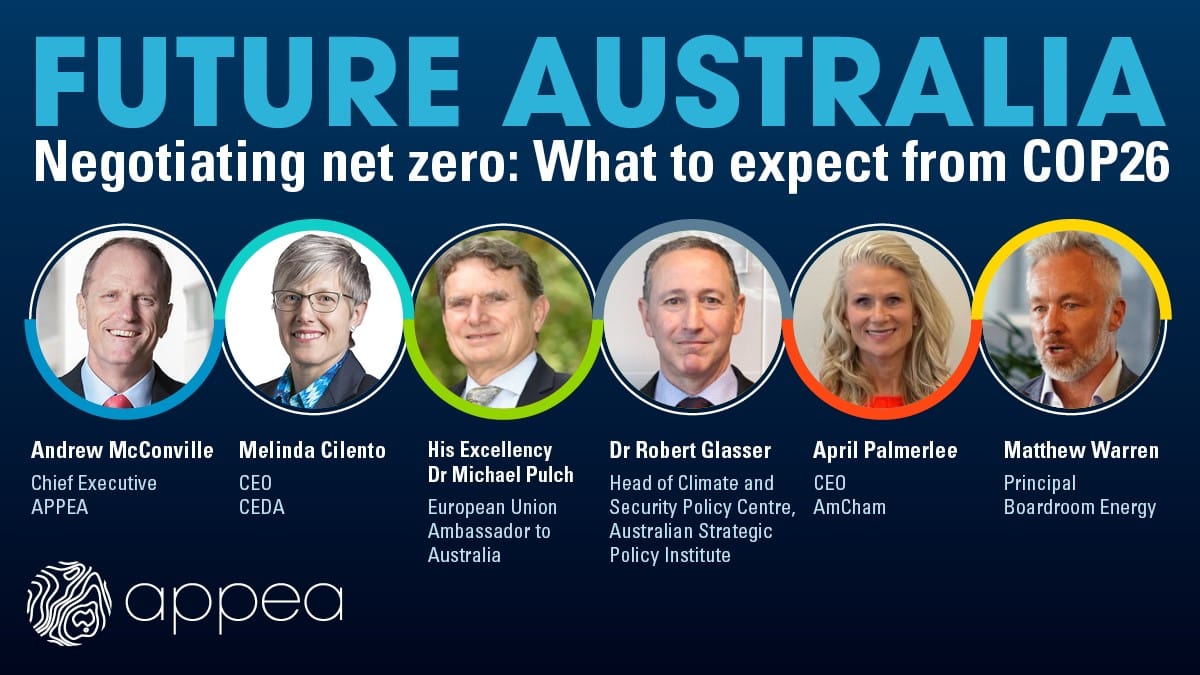 Mr McConville followed to talk on behalf of the Australian oil and gas sector, stating that effectively managing climate change would prove a “delicate balancing act” for Australia as a country with a highly developed yet resource-intensive economy. The key, he said, would be to balance growing demand for hydrocarbons (particularly in Asia) with the need to reduce overall emissions as part of the solution to climate change.

“What we’re seeing in Europe and parts of North America and China at the moment is that the transition to a lower carbon economy is difficult, complex and going to take time.

“Out of that complexity comes opportunity and that’s very much where we see the role for our industry in terms of using technology to decarbonise significant sources of fuel.”

Dr Glasser then discussed climate risks, pointing out that there “should be a strong sense of urgency” in transitioning to renewables as the world heads towards 2.7-3 degrees Celsius of warming.

He added that it was within Australia’s national interest to advocate for greater climate change ambitions globally.

“If we want to be taken credibly and want to get some traction from our efforts, that requires greater ambition and I’m fairly confident that our Prime Minister is about to announce a net zero commitment for Australia and a more ambitious 2030 target,” he said.

Mr Warren, who served as a former chief executive of the Australian Energy Council prior to his current role as principal at Boardroom Energy, said that the EU’s announced carbon border adjustment mechanisms (colloquially referred to in media as a ‘carbon tax’) were “the most important shift” in climate change response since the Paris Agreement.

“The threat of the Europeans and the US beginning to bring carbon border mechanisms into play drove radical shifts in the geopolitics of China and the Asian economies which saw their export markets faced with this new risk,” he explained.

“[Companies will] never imperil the margins to do expensive things that their competitors aren’t doing unless a government sets a constraint on emissions and a price on emissions that requires them to both do the same thing.”

For more information about the event, read The Australian’s article here.