Australia has a significant number of large-scale LNG developments operating across the nation’s gas basins. These developments are located right across Australia with a high concentration in Western Australia, Northern Territory and Queensland. 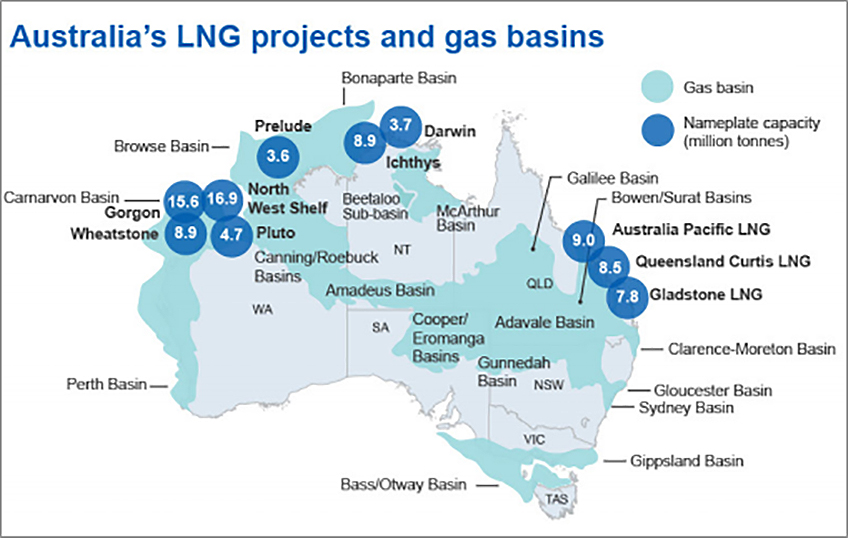 The oil and gas industry has invested more than $350 billion in the economy over the last decade.  Since APPEA’s annual Financial Survey commenced in the mid 1980s, investment (as measured by the value of capital assets) has been almost three times greater than the industry’s net profit over the period.

According to the September 2019 Resources and Energy Quarterly from the Department of Industry, Innovation and Science (DIIS), the value of LNG exports has increased six-fold over the last decade, totaling $50 billion in 2018-19 and forecast to increase to $52 billion in 2019-20. In 2018-19, LNG became Australia’s second largest commodity export after iron ore in export revenues.

As of October 2018, the Australian oil and gas industry had more than $70 billion worth of potential projects in the investment pipeline at different stages of development (see table below)

The completion of the final three Australian LNG projects – Wheatstone (train 2), Ichthys and Prelude will underpin the strong growth in export volumes and bring total export capacity to 88 million tonnes.

Future investment by the industry, is by no means certain.  The challenging market, increasingly complex and often uncoordinated regulatory requirements and fiscal uncertainty mean it is more important than ever to ensure the policy and regulatory framework remains competitive and encourages exploration and development.Source: Department of Industry, Innovation and Science

A competitive taxation regime is essential if Australia is to continue to attract investment.  Further investment in existing and future oil and gas projects is needed to underpin secure and reliable energy supplies.