Australia’s oil and gas industry is immensely saddened to learn of the passing of industry leader and world-class regulator Barry Goldstein.

Barry leaves a much-lauded legacy in the industry in a career that spanned 45 years, most notably as executive director of the South Australian Government’s Energy Resources Division for the past 20 years.

“In his time as a regulator he revitalised petroleum exploration in South Australia, establishing a best-practice approach to onshore regulation that continues today.

“He will be remembered and respected for the regulatory systems he and his team developed, that ensure industry is held to the highest standard with regulations that are sensible, streamlined, risk-based, and based on sound technical practice.

“Whip smart and committed to industry best practice, Barry was also well-known for his sense of humour, much appreciated by all who worked with him.

“On behalf of the APPEA Board, APPEA’s employees both past and present, and a most thankful industry, we extend their deepest sympathies to Barry’s family, friends, and colleagues in the South Australian Government. He will be sorely missed.”

In recognition of his outstanding contribution to petroleum exploration and production in Australia, Barry was awarded the Lewis G Weeks Gold Medal by the APPEA Board in 2013. 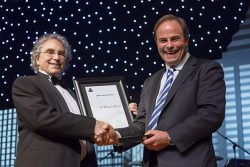 In his career, he explored and discovered oil in the North Sea, Indonesia, Australia, Papua New Guinea, and South America.

In the early 1980s, he came to Australia where he eventually became Exploration Manager and Chief Geologist at Santos before commencing his most recent role, in 2002, as Executive Director of Energy Resources for the South Australian Government.

To view this media release as a PDF, please click here.